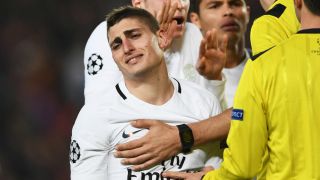 The Italy midfielder has been linked with a move to the likes of Barca, Juventus and Real Madrid, but possesses a contract in France until 2021.

Kluivert was asked whether Verratti's situation had changed given the dramatic collapse at Camp Nou, which saw Luis Enrique's side record the biggest comeback in Champions League history to reach the quarter-finals.

But the former Barca striker insists the 24-year-old, who was visibly upset after the match, will be staying in Paris.

"Verratti is the cornerstone of our midfield and things will remain that way," Kluivert said to Le10Sport.

"He is not going anywhere this year."

Before the match, Verratti's brother Stefano had suggested he would be willing to stay at PSG for the rest of his career, given how well he has settled at the club.

The former Pescara player spoke of his shock in the aftermath of the Camp Nou capitulation, which saw Barca score three times from the 88th minute to win the last-16 tie 6-5 on aggregate.

"This is a game I will never forget and I hope it will serve as a lesson to everyone.

"We lost 6-1, so it was not the referee's fault. We are the first ones responsible for this."

PSG are yet to progress past the quarter-finals in Europe's elite club competition.