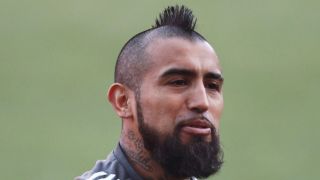 Vidal has not played for Bayern since coming off in the Champions League quarter-final first-leg win at Sevilla with a knee injury on April 3.

And having felt pain in his right knee during Sunday's session, Vidal could be a doubt for the semi-final against Real Madrid, the first leg of which is 10 days away.

"Vidal had to break off the session," Bayern said in a short medical update.

"The 30-year-old will undergo a thorough examination, an exact diagnosis will follow on Monday."

Arturo Vidal was forced to leave training early today after feeling a pain in his knee. A full diagnosis will be made on Monday.Get well soon, !  April 15, 2018