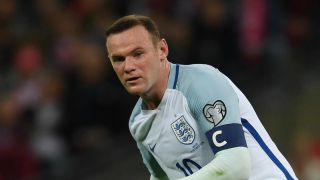 Rooney will make his 120th and final appearance for England in a friendly against United States this month, with some of the proceeds from the match going to his charity foundation.

The move has been met with a mixed reception, with England's all-time record appearance maker Peter Shilton describing his return after two years without a cap as "completely wrong".

Alan Shearer also criticised the decision to give Rooney an England farewell, claiming it would turn the US game - three days before a crucial Nations League clash with Croatia - into a "testimonial".

Rooney's former England team-mate Walker, however, is fully in support of the DC United star being given one last appearance at Wembley.

"It's good. Wayne was there from when I was 20," Walker told a news conference ahead of Manchester City's Champions League meeting with Shakhtar Donetsk.

"He helped me right through my England career and I think it's the send-off he deserves for what he's done for both English football and for England."

Here's what had to say about the USA game being dedicated to :November 4, 2018

Sterling scored twice in England's last game, a thrilling 3-2 Nations League defeat of Spain, and he struck another double in a demolition of Southampton in City's last Premier League game.

"He's been a joy to work with," Walker said of Sterling. "I've played with him in numerous games now on the right-hand side. It's a pleasure to play behind him.

"I just said to him to play with a smile on your face. With the players we have in the dressing room and the manager we can help him to reach the levels he can.

"But there's still work to be done. He can dedicate himself to the game to make sure he is one of the best players in the world."