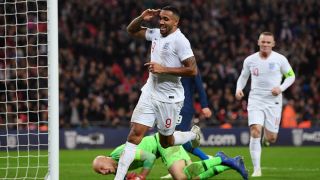 Debutant Wilson put the finishing touch on a 3-0 victory at Wembley with Jesse Lingard's stunner and Trent Alexander-Arnold's first England goal having put the hosts on course.

But the evening belonged to Rooney, who came off the bench for his 120th and final cap, with Wilson saying the memories of making his debut, and scoring, alongside the Three Lions great will stay with him forever.

"I have no words, it hasn't sunk in at the moment. It was an opportunity for me and I just wanted to grab it with both hands," he told Sky Sports.

"Wayne Rooney is a legend for England, to receive my shirt from him before the game was a great honour and I got to share the pitch with him as well.

"His chapter is ending now and mine is just starting. I thought the chance [to score] had gone, I knew time was not on my side, I saw Marcus Rashford standing there [waiting to come on] and I thought I had a few minutes.

"It is a day I will treasure for the rest of my life."

Borussia Dortmund teenager Sancho, making a first England start, was among those in an experimental side to impress and said a pep talk from Rooney inspired him to demonstrate his abilities.

"Playing with Wayne Rooney was a dream come true because obviously he is a big legend and a role model to me," he told BBC Radio 5 live.

"I was a bit nervous ahead of the game and he came over to me and told me to just express myself because I had nothing to lose.

"Without that talk I might have still been nervous. I never thought I would make my debut at 18 years old but I just have to thank the coaches for giving me the opportunity to play."

Alexander-Arnold, who won the Man of the Match award, was thrilled to get off the mark for England and hopes to emulate Rooney's number of caps.

"He is someone who I have seen when I was younger and tried to replicate, I want to be making the same amount of appearances for England as him," he told Sky Sports.

"I have been watching Rooney from early on, he came on the scene from a seriously young age and he's shown that from when he was young he was scoring goals, doing his job and worked really hard."