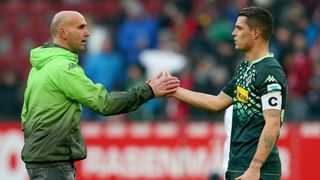 Interested parties will need to pay more than €30 million if they want to take Granit Xhaka away from Borussia Monchengladbach, says coach Andre Schubert.

Switzerland international Xhaka has been linked with a big-money move away from Gladbach at the end of the season, with Arsenal reportedly keen on his signature.

The club captain has previously spoken publically of his desire to play in the Premier League in the future, but his coach is expecting a higher sum than the suggested €30m fee he would be available for.

"They need not even send the fax with a 30 million euro offer for Granit Xhaka," said Schubert.

Sporting director Max Eberl admits he is worried about the potential problems such speculation could cause at the end of the season, but insisted no offers for the 23-year-old have been received from England.

"I fear it could get very tumultuous regarding rumours in summer," said Eberl.

"There is currently no offer from England. I'll keep you up to date when the first faxes roll in."

Although Eberl admits it will be tough for them to ensure a place in Europe's premier club competition next season, he feels the club are a "sexy" proposition for many players.

"Our club has become sexy. We've undergone a fantastic development," he said.

"It's obviously our dream to play in the Champions League again, but dreams are hard to achieve."