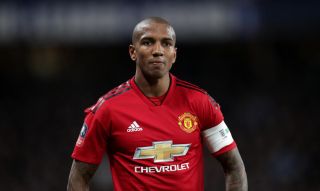 United were thrashed 4-0 in an embarrassing capitulation at Goodison Park on Sunday.

They have now lost six of their last eight games in all competitions and this week’s visit from in-form, title-chasing rivals Manchester City seems the last thing they need.

Left-back Young feels the opposite should be true.

The 33-year-old said: “We have got another tough one coming up on Wednesday, a Manchester derby. I don’t think we have to speak about that – we know how important that is going to be. If you can’t get yourselves up for a Manchester derby there is something wrong.

“I think it can be (the best thing), it is a Manchester derby. I’ve got confidence in every player that we are going to be ready on Wednesday.

“We have got to dust ourselves down fairly quickly and go again this week.”

The result at Goodison left United sixth in the Premier League and still with ground to make up in the battle for a top-four place.

The derby is followed by another testing clash against Chelsea before United face Huddersfield and Cardiff in their final two fixtures.

Young said: “It’s four games, four winnable games. If you’d looked back in October and (said) we were going to be in this position we would have taken it, but a club like Manchester United should be looking much further up the table.

“We have got four games left, four wins to get. It is not going to be easy, it is going to be tough, but I am sure we can do it.”

Lethargic after last week’s Champions League exit to Barcelona, United never got going against Everton and did not even muster a shot on target until the 86th minute.

They were stunned by early goals from Richarlison and Gylfi Sigurdsson before further strikes from Lucas Digne and Theo Walcott in the second half piled on the misery. It was as comprehensive as the scoreline suggested and manager Ole Gunnar Solskjaer apologised to fans afterwards.

Difficult to put what I am feeling today into words. As captain I want to say that the performance of the team today, on top of the result, was not up to the standard expected when you pull on this shirt…— David de Gea (@D_DeGea) April 21, 2019

“It’s a big disappointment, especially after midweek,” said Young. We wanted to get ourselves back to winning ways and I thought we had a great opportunity to do that.

“Obviously we would have got ourselves further up into the top four but from the first whistle until the end we were beaten all over the pitch. It’s disappointing.”