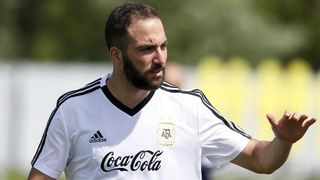 Gianfranco Zola believes Gonzalo Higuain has arrived at Chelsea at a perfect time in his career and backed him to improve the team's impotent attack.

The Argentina striker completed a loan switch from Juventus to Stamford Bridge earlier this week and was introduced to the crowd prior to Thursday's EFL Cup semi-final success over Tottenham.

At 31 years of age, it could be argued his best days may be behind him but Zola, who moved to Chelsea from Napoli aged 30 himself in 1996 and went on to become a fans' favourite, is confident Higuain will be a success.

"Now with the level of professionalism and with the resources that the players have, 31 is a good age. There is not a doubt about that. Plus, the age relates to the person. It seems he takes care of himself.

"It is exactly the same question they posed when I came over here.

"Yes, we know he's coming from a different league, maybe a league where the intensity and rhythms are lower than the Premier League, but we're talking about a player who has scored not only in Italy, but everywhere, also in the Champions League.

"Everybody knows his best qualities, the goalscoring record. He's a player who can score in many ways, so we hope that he can bring his qualities to this team and, at this moment, it's very much necessary."

Higuain joins Chelsea after a disappointing loan spell at AC Milan in which he scored six goals in 15 Serie A appearances but Zola is confident he can get his career back on track with Chelsea and make a better fist of the centre-forward role than Alvaro Morata and Olivier Giroud.

Gianfranco Zola is talking to the press today. He says it hasn’t be decided yet whether Gonzalo Higuain will start on Sunday. Zola points out he is a player who can score in many different ways.— Chelsea FC (@ChelseaFC) January 25, 2019

He added: "I'm sure there are big expectations.

"I'm also sure Gonzalo is used to it. He's played for big clubs - Real Madrid, Juventus, Napoli. I'm sure he can handle these expectations. He's always produced good numbers wherever he's been.

"This is not a team that is desperate, it's a team that needs to add certain qualities to what it already has. We're going to help Higuain to get his goals, but also Higuain will help the team if he scores.

"What I thought when I first came over here was to read the league, read the weaknesses of the league, but also the possibilities, don't underestimate and have an open mind. That's what allowed me to get into the system quickly.

"With him it's going to be the same. I'm sure he's going to be looking at defenders, saying 'oh those defenders tactically make some mistakes', which is true sometimes. The intensity and the physicality of the game you have here, I'm sure he'll be studying it, reading the situations and using his ability to get the goals that we need."

Higuain could make his debut in Sunday's FA Cup fourth-round tie against Championship side Sheffield Wednesday.