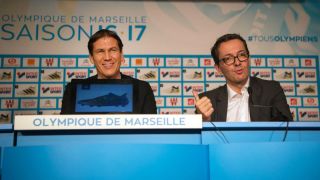 Garcia took charge of the Ligue 1 giants on Thursday, replacing Franck Passi at the helm ahead of Sunday's Classique against Paris Saint-Germain.

His appointment followed American businessman Frank McCourt's purchase of Marseille, and reports have suggested Zubizarreta could also join as part of an overhaul of the club's management structure.

Zubizarreta was sacked as sporting director by Barca in January 2015 after more than four years in the role, overseeing the arrivals of players including Luis Suarez, Ivan Rakitic and Javier Mascherano.

Eyraud confessed a meeting between Garcia and the former goalkeeper has taken place, but would not expand further.

"Rudi Garcia and Andoni Zubizarreta met, but we will see about the sporting director later – this was Rudi's week," said Eyraud in an appearance on Telefoot.

The president is also planning changes to the playing staff in the next two transfer windows.

Eyraud would like to retain the services of on-loan striker Bafetimbi Gomis and captain Lassana Diarra, who has reportedly turned down a contract extension at Stade Velodrome.

"In the January transfer window we will try to seize the opportunities that arise. We will be on the lookout, but we will strike hard this summer," said the president.

"I love Gomis. He is very compatible with Marseille. If he wants to continue with us, it's not a problem.

"Diarra is a complicated issue. He is very intelligent and is a leader in the dressing room. We will be delighted if he stays."