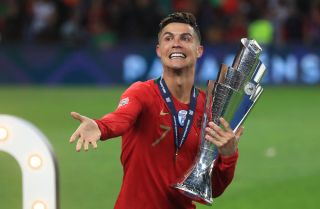 The inaugural UEFA Nations League was won by Portugal, with Holland finishing runners-up and England claiming third place with a penalty shoot-out victory over Switzerland.

Here, Press Association Sport looks at the purpose of the competition and its implications for Euro 2020 qualifying.

Portugal won the Nations League, what does that mean?

Aside from picking up the trophy, essentially not much – yet. They still have to go through qualifying for the European Championships. They are currently third in Group B but have played one match fewer than Ukraine and Luxembourg.

So what was the point of it all?

The Nations League provides a second chance of Euro 2020 qualification should teams not progress as one of the top two sides in the 10 groups already under way. At the end of regular qualifying, each of the already-decided Nations League’s four group winners in Leagues A, B, C and D go into their own play-off for one place at the Euros. If the winners are already qualified through the traditional method, their place goes to the next best-placed team who do not have a Euro 2020 place.

It is not all over for the Nations League then?

No. In March, when Euro 2020 qualification is over, we will return to those Nations League tables and select four teams from each of the groups in League A, B, C and D, applying the previously-mentioned criteria. Four new mini-leagues will be formed from the 16 teams and each league will have its own path to Euro 2020, consisting of two single-leg semi-finals and one final. The better-ranked team will have home advantage for the semi-final. A draw to determine potential home teams for each final will be made on November 22.

When will England play in the Nations League again?

That remains to be seen. If they do not finish in the top two of Group A in Euro 2020 qualifying (they are currently top of their five-team table featuring Czech Republic, Kosovo, Bulgaria and Montenegro with a three-point lead after two matches) then they will be in the Nations League play-offs. Semi-finals take place between March 26 and 28, with finals being held on March 29-31.