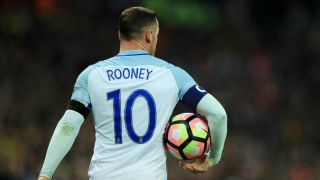 Rooney will win his 120th Three Lions cap in a friendly against the United States at Wembley, with some proceeds from the game going towards his charity.

The DC United forward, who has not played for England for two years, will not start the match but will be introduced as a substitute to allow fans to pay tribute to the country's record goalscorer.

Manchester City defender Kyle Walker has praised the decision to hand Rooney a return to the international fold, but other notable names have been less than impressed.

Peter Shilton, the only player with more England caps than Rooney, described the move as "completely wrong", while former striker Alan Shearer said the call reduced the game, a warm-up for a Nations League clash with Croatia, to a "testimonial".

Germany and Netherlands have paid similar tributes to retiring players Lukas Podolski and Wesley Sneijder at the end of their international careers and Southgate defended Rooney's surprise recall.

"If anybody deserves one more cap, it is somebody who had 119, more than somebody that has had one or a handful," said Southgate.

"He has earned the right to that cap over a period of over 10 years and six major tournaments with England and to be the record goalscorer.

"I think there would be numerous examples of people that have earned caps in different circumstances. The fact is it is an opportunity to pay tribute to what he has achieved.

"We are a strange country in that we bemoan the fact we haven't achieved as much as we'd like and then we have a player who should be held in the highest regard and we are spending a lot of time justifying giving him that tribute.

"From my point of view, I am looking forward to seeing him, working with him over the next few days, giving him the send-off I think he deserves, which isn't always possible for players. With this opportunity, it is possible and I am sure the crowd will give him the opportunity he deserves."

All set for our final games of 2018!See who's in the squad for our international against the USA and clash with Croatia: November 8, 2018

Southgate suggested the Rooney tribute could have taken place prior to the World Cup, but the Manchester United great was not keen on the idea.

"I was actually quite happy for the tribute to be before the World Cup but in fairness to Wayne, he didn't want to detract from the team at that time," added Southgate.

"So, of course everybody respected [him] and we saw the sense in that. Now we have the opportunity with a game at Wembley to pay that tribute.

"As a manager, my involvement was 'was I happy for him to play a part in the game' and I think actually, yes. I am still able to look to the future in terms of the squad I've picked and the things I want to see but also I've talked a lot to the players about the importance of the shirt, the history and honouring former players.

"I understand that has caused a lot of debate and conjecture but for me I think it is a small way of appreciating what he has done for his country."