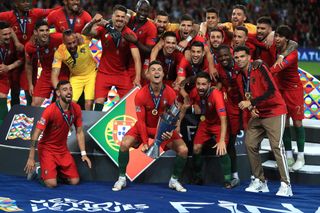 Portugal boss Fernando Santos dedicated victory in the Nations League to his ill mother and brother-in-law as he once again guided the country to trophy success.

Goncalo Guedes hit the only goal of Sunday’s final against Holland to be crowned the first champions of UEFA’s latest international competition.

A match billed as a battle between the two captains, Cristiano Ronaldo and Virgil van Dijk, was settled by Valencia’s Guedes on the hour-mark in Porto.

The 1-0 win was enough for the reigning European champions to add the inaugural Nations League crown to their collection with victory in front of their own fans and on the eve of Portugal Day – a national holiday celebrated annually on June 10.

Santos, 64, was quick to devote the win to two members of his family, as well as toasting his players for winning a second major title in three years.

“I’d like to thank my players for the excellent performance, this was their win, work and commitment,” he said.

“More personally, allow me to dedicate this win to my family, particularly my mother and brother-in-law who are in ill-health and I hope this win gives them strength.”

It remains to be seen how much the Nations League will grow in stature in the coming years and how Portugal’s victory in the first edition will therefore be judged.

But Santos is certain it will develop into a sought-after trophy as he looks to win more titles in the coming years.

“I’m sure this tournament will become a classic because it is a tournament where the entire European family plays and to be the first winner…we will go down in history,” he said.

“It is a joy to win the first edition – but that is all it is. Now we must work to pursue more goals.

“It will leave an everlasting mark in Portuguese football to have played in three finals, four semi-finals, the World Cup did not go as we hoped but this team marks the future because the future is here.

“If we look back to 2016 some of the brilliant players who were there are no longer here, it is an ongoing process and speaks about what Portuguese football is.

“We don’t have the finances to keep them in Portugal and they are spread throughout Europe.

“The future of Portuguese football seems to be assured, what we need to do is keep the balance when they come together for the national league because they play in different championships in different leagues.”

Holland boss Ronald Koeman was pleased with his side throughout the competition but admits success at Euro 2020 may be too much to ask.

“First of all to play a final, even if you don’t win it you take that experience with you for the next times,” he said.

“We know we made big steps in more than one year in the Nations League campaign. Against Germany, France, England and Portugal made four of the best five or six teams in Europe.

“But to make the next step maybe we need more time and more offensive strengths to create more chances to have what we missed tonight.

“Maybe it (Euro 2020) is too early to win, maybe we need to wait for the next Euros to get a chance to win something but that is (being) a little bit negative (about)  the performance and quality of this team.

“I’m really proud of the spirit of this team, it wasn’t enough tonight but the whole campaign was really positive.”