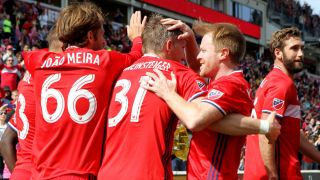 The red-hot Fire made light work of the Revolution thanks to goals from Matt Polster, Juninho, Michael de Leeuw and Luis Solignac following the MLS All-Star break in Chicago on Saturday.

Polster opened the scoring for the Fire in the eighth minute at Toyota Park, only for it to be cancelled out by Kei Kamara 16 minutes later.

But it was one-way traffic from that point as Juninho, De Leeuw and Solignac led the Fire to their ninth successive home victory – the second-longest streak in MLS history.

The Fire are now only three points off top spot with a game in hand after Toronto were held to a 1-1 draw at 10-man DC United.

Toronto fell behind to a Kofi Opare goal in the sixth minute but they were boosted by Lloyd Sam's red card on the stroke of half-time.

And Toronto managed to salvage a point, albeit fortuitously, thanks to Steven Birnbaum's own goal seven minutes into the second half.

It was a masterclass from the streaking Sounders, who routed Minnesota 4-0 away from home.