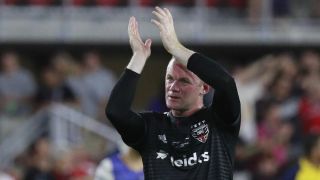 United and England's all-time leading scorer, Rooney found the back of the net in the 33rd minute after receiving a pass from Luciano Acosta and guiding the ball through the legs of Rapids goalkeeper and former Red Devils team-mate Tim Howard.

Rooney was left bloodied with a broken nose and a gash above his left eye, which required five stitches in a gritty performance against the Rapids.

"I don't think it's the first time he's bled in a game, DC head coach Ben Olsen said. "He is a tough guy and I think that he will shake it off. But again, it shows you what this means to him right now. He is in the box, putting his face on the line, understanding that this is a big moment. They are good on set pieces and we needed that.

"We needed that play to get us out of that spot and he's selfless in that way. He has been fantastic in every aspect, in every way that we want him to be with this group… with his leadership and goal-scoring ability. Hopefully, it can continue to get better."

Canadian sensation Davies celebrate his Bayern deal by netting a brace in the Whitecaps' 4-2 victory against Minnesota United.

Bayern agreed a reported initial fee of €11.2million – an MLS record – which will see the 17-year-old forward move to the Bundesliga champions in January.

And Davies offered a glimpse into what Bayern will be getting as he scored two second-half goals and assisted Yordy Reyna's opener in scintillating display in Vancouver.