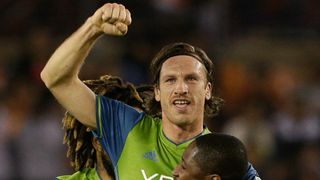 The Sounders were too strong away from home in Houston as the titleholders made the most of their numerical advantage on Tuesday.

Houston's Jalil Anibaba was sent off approaching the half-hour mark for denying an obvious goalscoring opportunity after Swedish midfielder Gustav Svensson broke the deadlock in the 11th minute.

The Sounders capitalised three minutes before half-time when former Dynamo forward Will Bruin doubled the lead with a guided header into the top corner of the net.

Seattle, who will host the return leg on November 30, are potentially 90 minutes away from advancing to back-to-back MLS deciders.

Meanwhile in the east, Columbus Crew and Toronto FC played out a goalless draw.

Visitors Toronto failed to get a shot on target in the absence of star forwards Sebastian Giovinco and Jozy Altidore.

Toronto goalkeeper Alex Bono also made a fine save to deny the Crew's Harrison Afful with five minutes to play.