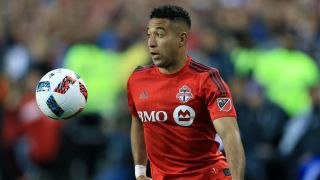 Justin Morrow scored a hat-trick as Toronto sealed the Shield in style with two regular-season matches remaining, accounting for the Red Bulls 4-2 on Saturday.

After clinching the Shield for the best record during the regular season thanks to 19 wins and 65 points so far, Toronto are one victory away from tying the record for the most victories in a season set by Seattle Sounders in 2014, while they only need three points to equal LA Galaxy's highest-ever points total in 1998.

Toronto stormed out of the blocks at BMO Field, Morrow scoring twice in five minutes before half-time.

At long last, the Shield is ours. Relive our dramatic win over the on a wild night at | October 1, 2017

That lead was erased by the Red Bulls, who were back on level terms by the 77th minute thanks to Gonzalo Veron and Daniel Royer.

Toronto retook the lead just minutes later when Victor Vazquez converted a penalty after Jozy Altidore was fouled in the area, and Morrow sealed the victory in stoppage time.

Despite the loss, the Red Bulls remain sixth in the Eastern Conference with two games left before the play-offs.

. turns the tide with a sick ball to find for his 20th of the season and a late first half equalizer October 1, 2017

After Chicago's Nemanja Nikolic opened the scoring in the 20th minute, Villa equalised two minutes prior to half-time.

It was Villa's 20th goal of the season, which tied the mark set by Wright-Phillips for two seasons of 20 goals or more.

New York are second in the east and nine points adrift of Toronto, four points above the fourth-placed Fire.