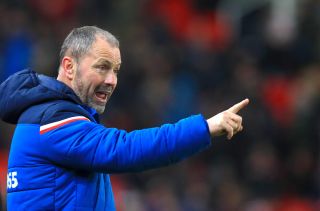 Reading have named Mark Bowen as their new manager.

The former Wales defender moves from his position as sporting director at the Madejski Stadium to replace Jose Gomes, who was sacked last week.

The Royals are third bottom of the Sky Bet Championship table, without a league win since the end of August.

Chief executive Nigel Howe is confident 55-year-old Bowen, who joined the club as a consultant towards the end of the 2018-19 campaign, can move the Royals forward.

“In the relatively short period of time that Mark has already spent at Reading Football Club, he has commanded respect and admiration from all who have worked alongside him,” Howe said on the club’s official website.

“He came in at a critical period last season to help us retain our Championship status and had an immediate impact.

“Mark has two decades of coaching background on his CV, has tasted promotion to the Premier League and spent most of his coaching career in top-flight football.

“He knows this club and the owner and the board believe he is very capable of getting the very best out of a talented group of first team players and achieving the results we all want.”

Bowen won the 1984 UEFA Cup with first club Tottenham before joining Norwich three years later.  He spent almost a decade with the Canaries, helping them finish third in the first season of the Premier League and going on to play in the UEFA Cup.

The left-back also later had spells at West Ham and Charlton, as well as brief stints with Wigan, Reading and Japanese side Shimizu S-Pulse.

Bowen, who won 41 international caps, has never managed in a permanent capacity at senior level before but has regularly worked as an assistant to Mark Hughes, including with Wales, Manchester City, Stoke and Southampton.