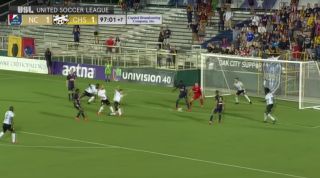 North Carolina and Charleston Battery were level at 1-1 heading into the final few seconds of their United Soccer League (USL) clash on Saturday. And it was in those final moments when chaos ensued as the hosts had six golden chances arrive in the space of a few seconds.

Daniel Armando Rios fired a cross into the box which set off a bizarre chain of blocks and ricochets that could easily be mistaken for a game of FIFA 18.

2:07 for the goalmouth scramble

Was there a supernatural force stopping North Carolina from scoring?

"Can someone just put it in the back of the net, please?" Clarke told WRALSportsFan.com post-match.

"It was tough to watch, it was like 30 seconds of madness. No one could get a handle on it, and it looked like a puck in ice hockey jumping around in front of the goal."