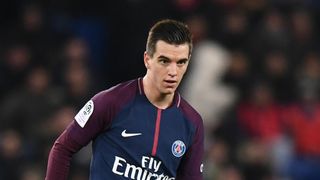 Former Real Madrid and Marseille midfielder Diarra is out of contract after leaving Al Jazira last month, with his availability as a free agent reportedly appealing to PSG following their massive investments in Neymar and Kylian Mbappe.

But Emery suggested Diarra is not a transfer target, instead naming Lo Celso as a player who can be used to anchor the PSG midfield, with veteran Thiago Motta suffering from a calf injury and both Adrien Rabiot and Marco Verratti preferring more advanced roles.

Lo Celso starred in a 6-1 Coupe de France thrashing of Rennes on Sunday, but only three of he Argentine 21-year-old's 15 Ligue 1 appearances this season have been starts.

"I hope it is a small injury [to Motta] and he'll be back soon," Emery told reporters on Tuesday. "It's for [sporting director] Antero [Henrique] to speak about the transfer market.

"Lo Celso is an excellent example. He came a year ago, he was patient, he trained, he joined the group and then played matches.

"A lot of clubs are asking about him. He is involved in the balance of the team and he can contribute offensively.

"I know the player [Diarra] and I am very happy with those who are here. Lo Celso can play there. It's Antero who has the final say, even if my opinion is very important."

Edinson Cavani and Javier Pastore were omitted from the PSG squad for the Rennes game after the South American duo reported back to the club late following the mid-season break.

But Emery would not confirm what punishments Cavani and Pastore have been given, nor whether they would be recalled for Wednesday's Coupe de la Ligue quarter-final at Amiens.

"The most important things are the group and the team," Emery said.

"Both players continue working to catch up. We'll continue with those who are doing well.

"I spoke with them personally and the club did, too. It will stay between us."