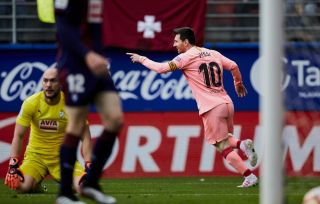 Lionel Messi struck twice for Barcelona as the title-winners were held to a 2-2 draw at Eibar in their final league game of the season.

Eibar took the lead against the LaLiga champions through Marc Cucurella, before Messi fired back with two goals in two minutes to put Barcelona ahead.

In a game with plenty of chances, Eibar equalised on the stroke of half-time as Pablo De Blasis’ incredible volley ensured the points were shared.

Barcelona wanted to end their league season on a high ahead of the Copa del Rey final against Valencia on May 25 as they look to complete the domestic double.

The game started openly, with both sides having shots saved in the opening five minutes at the Ipurua Municipal Stadium.

Barcelona came close to taking the lead when Jordi Alba sent a ball across the face of the Eibar goal, but no one was on the end of his cross.

Cucurella opened the scoring against his parent club as the 20-year-old got on the end of a Sergi Enrich pass, making the most of a Gerard Pique slip, before firing the ball underneath goalkeeper Jasper Cillessen.

Messi struck the equaliser after a ball from Arturo Vidal went through the defence and found the Argentinian, who took a touch before slotting home his 35th goal of the season.

The league’s top goalscorer put his side in the lead just a minute later. After finding himself with large amounts of space on the halfway line, Messi ran forward before tapping the ball cleverly over the goalkeeper.

In a moment of concern for Barcelona, Nelson Semedo went down after a clash of heads and had to be replaced.

In the final moments of the first half, after Eibar forced Barcelona to play out from their box, the ball fell to De Blasis who volleyed expertly over Cillessen and into the net.

Barca’s best chance of the second half came when Malcom crossed the ball in from the left but Pique in the centre of the box was unable to get close enough to tap it in.

Cucurella almost struck a winner for Eibar in the 80th minute but his effort from inside the box went just wide.