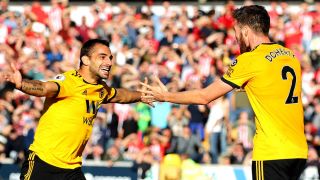 Wolves extended their unbeaten run to five Premier League matches with a 2-0 home victory over Southampton after late goals from Ivan Cavaleiro and Jonny.

Cavaleiro came off the bench to score on his first top-flight appearance after combining with Raul Jimenez 11 minutes from time.

Three minutes before the end, Jonny also opened his Wolves account to seal the points.

Saints were resilient in defence but offered very little in attack as their poor start of the season continued – they have now won only one of their opening seven league games.

Wolves created the better chances throughout but could not find a way past Alex McCarthy until the dramatic finale, while Danny Ings, returning to the Southampton side after missing the defeat to parent side Liverpool last weekend, struggled to get involved.

A relatively quiet first half saw few chances for either side although McCarthy was tested by Jonny's strike to finish a swift attacking move from the hosts, while Rui Patricio was on guard at the other end to deny Mohamed Elyounoussi from close range.

Jimenez, seeing very little of the ball in a game largely contested in the middle third of the field, tested McCarthy shortly before the interval with a low first-time strike inside the area but will feel he could have connected better with his shot.

Nuno looked to the bench for inspiration early in the second half with the introduction of Adama Traore but it was only when Cavaleiro was introduced that the hosts found the breakthrough.

Jannik Vestergaard failed to deal with Traore's low cross into the box and Jimenez pounced on the loose ball, teeing a pass to Cavaleiro that the number seven tucked home with ease under two minutes after coming on.

Any chance of a late fightback from Southampton was then ended as Matt Doherty's run into the area was and cut back was pounced on by Jonny, the wing-back firing home from close range.