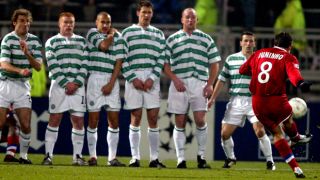 “Before you do anything, decide where you’re going to hit the ball. Take your time – consider the positioning of the free-kick, the placement of the wall and where the goalkeeper is standing. Do you have any previous knowledge of the goalkeeper? This will help you make the right decision. Then your main aim should be to hit the target, no matter what.”

2 MEASURE OUT YOUR RUN-UP

“If the kick is a long way out, I stand no more than five metres from the ball. On the approach, I take three or four steps to gain speed and power for the shot. If the kick is closer in, I prefer to take one long step, planting my standing foot close to the ball. The closer this foot is to the ball, the more accurate your shot will be.”

3 GET IN THE ZONE

“Concentration and mental toughness are essential to striking the perfect free-kick. You have to be very focused to hit the target. Shut out everything that’s going on around you and just concentrate on what you have to do. You can train for this moment all you want, but if you’re not focused at the crucial time, you’ll make a mess of the basics.”

4 GIVE THE KEEPER THE SWERVE

“My aim is to make the ball swerve. I like to approach it with a straight run-up, striking the ball with the inside of my foot like a pass but with more power. Strike the centre of the ball, connecting with the bottom and driving up through it. This will cause it to dip viciously, confusing the keeper. This effect is called ‘knuckleball’.”

July 22, 1998
River Plate 1 Vasco da Gama 1
Copa Libertadores semi-final
“The most special goal of my career was in the second leg of the Copa Libertadores semi-final against River Plate in Argentina. The free-kick was almost 35 metres from goal. I struck the ball as hard as I could, creating an amazing swerving effect. The goal ensured Vasco qualified for the final. Even to this day, the fans sing a song about that free-kick.”

November 5, 2003
Bayern Munich 1 Lyon 2
Champions League group stage
“Of the 100 goals I scored for Lyon, 44 came from free-kicks; the one I enjoyed the most was against Bayern Munich. At the time Oliver Kahn was the best goalkeeper in the world, but I put the ball in the top corner and he didn’t even come close to touching it – he was left hanging on the post. It was from a long way out, which made it even more pleasing.”

February 24, 2009
Lyon 1 Barcelona 1
Champions League round of 16
“We had a free-kick out wide on the left. Because of where the ball was placed, everyone thought I was going to cross the ball, but I thought I had a good chance of scoring from there. I aimed to hit the target and the ball found the top corner of the net, with Victor Valdes left grounded. He was so surprised he fell into the back of the net.”

For more football tips see:
Larsson: How to hit an unstoppable free kick