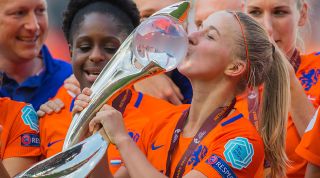 A thrilling Women’s European Championships came to an end on Sunday with the Netherlands overpowering Denmark, 4-2. There were some wonderful team and individual performances, but which players might have caught the eye of National Women's Soccer League clubs? Here’s five that stood out.

Former Netherlands striker Pierre van Hooijdonk, ambassador for the Women's EUROs, described Groenen as "our women's Iniesta" after he witnessed his country's triumph on home turf.

Much was made of the impact the likes of forwards Vivianne Miedema and Lieke Martens would make at the tournament, but few (if any) were talking about Groenen.

Currently at FFC Frankfurt in Germany, the 22-year-old justified the iconic No. 14 shirt by making the Netherlands tick from match one to the final.

Her ability to pick out the right pass, whether short or long, was a key component to the Netherlands' attacking play, while without possession, Groenen was a menace for the opposition, pressing high alongside fellow midfielder Danielle van de Donk, while Sherida Spitse sat slightly deeper to protect the back four.

The comparison to Iniesta in terms of style is not inaccurate. Groenen is not big in physical presence, but she is clever, rarely gives the ball away, and helps create quick transitions for her side when winning the ball back.

Teammate Martens won Player of the Tournament, but it could easily have gone to Groenen. Prizing her away from Frankfurt won't be easy – she is contracted to 2019, and Frankfurt played hardball with Dzsenifer Marozsan, refusing to let her leave for Lyon until the end of her contract.

With the exception of the victorious hosts, the Austrians were the surprise side of the tournament.

Fans in the U.S will have known about forward Nina Burger following a brief spell with the Houston Dash, but they may have previously been less familiar with midfielder Laura Feiersinger.

Topping a group that contained France was always going to be difficult, but the indefatigable Feiersinger played a major part in her side's progression. She was on the field every minute of the five games Austria played in reaching the semifinals, and that included extra time in both of the team's knockout matches.

Austria was well organized at the back and liked to play on the counter, and Feiersinger was the outlet to link the defense and the offense as it looked to attack teams with pace and push them onto the back foot.

Currently playing for SC Sand in Germany, the former Bayern Munich midfielder impressed in Holland, and could be a shrewd signing for the NWSL: as a tireless runner, but also technically sound, she would suit the league. Perhaps the Washington Spirit, still rebuilding after the loss of some key players last year, would benefit from her fiery approach in midfield.

NEXT: Why one Lioness needs to return, plus a do-everything Dane

You can't make a list of standout players from the tournament and not include a representative from both finalists, and Stine Larsen is a player who stood up when called upon.

At 21, Larsen came into the tournament as a forward and started the first game against Belgium up front alongside Portland's Nadia Nadim. But with injuries sustained to key defenders, Larsen was moved into the backline against Norway and stayed for the remainder of the tournament.

That meant, along the way, shutting out the likes of Norway’s Ada Hegerberg, Austria’s Nina Burger and Germany’s Anja Mittag. Slotting effortlessly alongside Simone Boye in the heart of the Danish defense, Larsen helped her team to an unexpected final appearance.

Denmark kept three clean sheets in its its six matches, thanks in part to Larsen's physicality and reading of the game. Having played both positions for club and country, Larson is an attractive proposition for any NWSL club. Her versatility would certainly benefit a team like the Boston Breakers, who are short up front, and need some cover at the back.

It would be easy to make a case for pretty much the whole Netherlands team to be in this list, but while the forwards fired and the defenders were disciplined, Sherida Spitse was the glue in midfield.

Jackie Groenen rightly caught the eye, but every Iniesta needs a Sergio Busquets behind them. For the Dutch, that role belongs to Spitse. She does the ugly work that goes unnoticed. She harasses the opposition and gives them no time on the ball.

But Spitse doesn’t just tidy up – she's also pretty useful from set pieces, too. She scored three goals in the tournament, two from the penalty spot, also converting a free-kick in the final that crucially gave her side the lead when the game was knotted at 2-2.

Spitse extended her contract for a year with her current club, FC Twente, in the Netherlands, but with the Dutch side missing out on the Champions League, a club like FC Kansas City could in 2018 benefit from her tenacity to challenge Desiree Scott, should Spitse look for a new challenge.

Yes, Jodie Taylor won the golden boot, and yes, she was named to the all-tournament team. So why would Arsenal even consider letting the forward leave for the NWSL?

Nobody is saying it will, but it is well known that the former Portland Thorns and Washington Spirit forward still considers the USA her home. She stepped up big time in the Netherlands, showing her ability to play on the shoulder of the center back and latch onto balls over the top while also dropping deep to bring into play the likes of Jordan Nobbs and Fran Kirby.

The semifinal against the Netherlands didn’t quite go according to plan, and that was largely due to the Dutch midfield three completely dominating England in the middle of the park, resulting in aimless balls out of the back looking for Taylor. Once that threat was nullified, England had little answer.

But Taylor was clinical prior to the semifinal, and when presented with a chance, she took it. With Vivianne Miedema moving to Arsenal this summer, and youngsters such as Danielle Carter and Beth Mead fighting for places, the Gunners are heavy in the No. 9 position.

Could a club like Seattle, who perhaps need some more competition for Bev Yanez, benefit from the goals of Taylor? Probably, but the question is, would she play for the rivals of the Thorns? If not, Boston, Houston and Kansas City could all use Taylor's firepower as the lowest three scorers in the league.