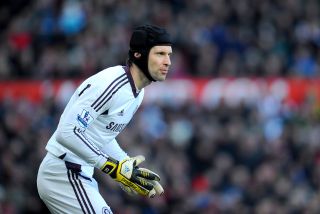 Any good team starts from the back, and one of the first things Jose Mourinho did upon becoming Chelsea manager in 2004 was nominate Petr Cech as his first-choice goalkeeper. Managers and trophies have come and gone, but nine years later Cech is still there, and rightly so.

Conventional wisdom, fuelled by the need for change and transfer tittle-tattle, may suggest that the Czech custodian is on the wane, but that's far from the case. In the 2012/13 Premier League season Cech made 118 saves - far more than any other goalkeeper at a club pushing for a top-four spot - as Chelsea's central defence revolved in front of him, with concerns over John Terry's fitness and David Luiz's fitness for purpose as a centre-back, while behind him the crowd took vocal exception to the interim manager.

Rafa Benitez has a lot to thank Cech for: the 31-year-old was arguably the key player in Chelsea's successful attempt to finish in the top four while forging ahead in the Europa League. As well as the sheer volume of saves he made, he had the league's best save percentage and kept 14 clean sheets; only Manchester City's Joe Hart managed more (18). And although Hart led the way in the race for the Golden Gloves, his high number of errors leading to goals (5 - compared to 1 the previous term) saw him drop out of contention for the Stats Zone gong.

Manchester United's David De Gea ended the season with a title winner's medal and a place in the PFA Team of the Year, but his inferior saves-to-shots ratio (76.4% to Cech's 76.6%) and catch success rate (96% to Cech's 99%) highlight why the Chelsea stopper edged the Spaniard out. Mourinho may be returning to a club in rebuilding mode, but he needn't replace his goalkeeper just yet.

Key Stats: In October's 4-2 derby win at White Hart Lane, Spurs had 26 shots (to Chelsea's 10), with Cech saving 8 - a number he matched at Newcastle. He also made 6 saves and kept a clean sheet at home to Man City in Benitez's home debut, but those three points at Tottenham ended up being the difference between Champions League and Europa League.

Next: Stats Zone Premier League Full-Back of the Year