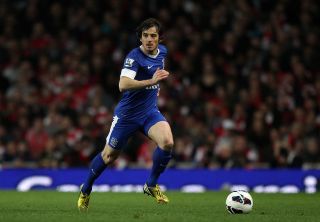 Full-back used to be the least glamorous, and perhaps easiest to fill, position on the field. They tended to be stout yeomen and club stalwarts, who scored once per decade then retired to run a pub. But the modern full-back needs to fill two positions, with the requisite skillset now including stamina, speed, passing, positional awareness and intelligence - as well as the traditional ability to occasionally dump a tricky winger into the advertising hoardings.

Leighton Baines puts the mod into modern full-back play. In 2007, shortly after David Moyes signed him for Everton for an initial £5m, the Scouser revealed that he struggles for self-confidence - but shows none of it in his adventurous and effective play. Had he been a right-back rather than jostling with Ashley Cole for England's No.3 shirt, he might have had 50 caps rather than 15.

The only outfield player to play every minute of this Premier League season, Baines set up a near-telepathic understanding with Steven Pienaar down Everton's left flank and helped the Toffees maintain their push for a Champions League spot into the final weeks of the season.

Known for his lethal set-piece delivery, the left-back also happily ranged forward in open play and created 116 goalscoring chances - more than any other player in Europe's top five leagues in 2012/13, with 5 assists along the way. Yet it would be unfair to label him as a purely attacking player; he made more than his fair share of tackles (92) - only five Premier League defenders made more.

Credit must be given to Manchester City's Pablo Zabaleta, the Premier League's top tackler (113), while the Stats Zone Awards judges also commended Swansea's Angel Rangel, Liverpool's Glen Johnson and Manchester United's Patrice Evra - who may find Moyes attempts to take Baines with him to Old Trafford. Whether or not that test of his confidence ever comes to pass, for his combination of diligent defending and continent-leading creation, Baines thoroughly deserves the inaugural Full-Back of the Year award.

Key Stats: Baines started as he meant to go on in August's away annihilation of Aston Villa. Paul Lambert's home debut was ruined by a rampaging Everton who completed more than 400 passes and had 21 shots at goal. Baines created 8 chances, a figure that would remain unsurpassed in the Premier League season, while also tracking back into his own half to contribute a tackle, an interception, a shot block, a clearance and a cross block.

Next: Stats Zone Premier League Centre-Back of the Year
Earlier: Goalkeeper of the Year