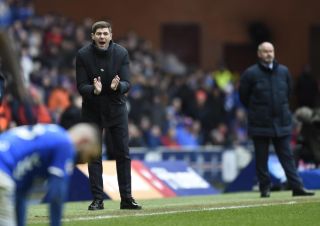 But Rugby Park boss Steve Clarke hit back as he insisted if anyone deserved a red card during their 1-1 Ibrox draw it was Gers defender Connor Goldson.

Alfredo Morelos slotted home his 29th goal of the season to cancel out Conor McAleny’s first-half opener for Killie but the result sees the Light Blues’ winless March continue.

But what left Gerrard fuming was the visitors’ physical approach.

Referee Greg Aitken handed out four bookings to Clarke’s men, while Goldson was one of two home players to see yellow after he cynically wiped out Liam Millar as the Killie substitute was set to burst through on goal in stoppage time.

However, Gerrard suggested his centre-back only resorted to nefarious means after seeing a string of Kilmarnock offenders get off lightly.

“We don’t expect anything from referees,” said the Ibrox boss. “I’m not sure how many yellow cards there were today, I think it was five, but it could have been eight or nine.

“And the same people which got booked were constantly fouling, and they weren’t even fouls, they were wiping out my players. We don’t feel as if we are getting enough protection at the moment, that’s for sure.

“Maybe we were lucky with the one at the end but maybe Connor thinks he can do that because they’ve done it eight or nine times and the referee’s done nothing about it.

“We may have been lucky but Steve Clarke could have been lucky five or six times because there are fouls on a football pitch which are fine, sometimes I know you have to make a foul.

That did not wash with Clarke, who responded: “We were competitive, start to finish. No more.

“The refereed ran the game as he saw fit, and if there as going toe a red card, it would have been for Rangers.

“If – if – it was going to happen, it would have been for the tackle by Goldson on Millar as he’s going through on goal, a chance to get a shot away. But the ref chose to give yellow and we accept that.”

Gerrard was hoping for a response after seeing his side crash out of the Scottish Cup to Aberdeen on Tuesday.

But they handed Killie the opener when Nikola Katic and Goldson got themselves in a mix-up stepping out, leaving McAleny clear to stride past Allan McGregor and slot home on the half-hour mark.

Morelos rescued a point as he rolled past Stuart Findlay on 65 minutes but Gers now risk falling 10 behind Celtic if the Hoops can take advantage at Dens Park on Sunday.

Gerrard added: “I’m disappointed by the result. We lost a poor goal defensively which gave Kilmarnock a huge lift.

“But I felt the reaction from us after we went a goal down was good. The players did everything they could to go get back into the game and we probably did enough to win.

“The reality is we didn’t and we have to take any criticism on the chin.

“We’re too reliant on Alfredo right now, so other people need to step up and try and chip in. I’ll do everything I can, when I can, to improve us in the final third.

“We need game changers, we need players that can be the difference when games are tight. We need more in the final third. I won’t shy away from that but right now we are doing the best with what we have available.”