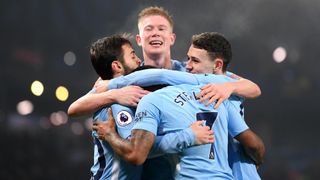 City won 3-1 against Tottenham at Wembley on Saturday to move to the brink of glory, but United's shock home loss to the league's bottom side wrapped up the trophy they have seemed destined to lift since the start of an all-conquering campaign.

Guardiola's men were close to securing the silverware faster than any club in the competition's history, falling short of the April 14 mark set by United in 2000-01 by a single day.

While they missed out narrowly on that particular record, here are some of the best Opta numbers from City's special Premier League season.

Champions!!!!!! What a great feeling!! So happy to be able to share another trophy with our amazing fans!April 15, 2018

28 - The champions' dominance has been evident across an impressive 28 league victories. They can surpass Chelsea's Premier League record of 30 (2016-17) by winning three of their remaining five fixtures.

3 - Guardiola is the third manager to win the Premier League in addition to at least two of the other top-five European leagues, joining Carlo Ancelotti and Jose Mourinho in the exclusive club.

902 - The number of passes completed in a one-sided 1-0 victory over Chelsea in March represented a new benchmark since Opta began recording the data in 2003-04.

16 - With their victory at Wembley - and United's loss to West Brom - City are 16 points clear at the top and chasing down the Premier League's largest title-winning margin of 18, which was set by the Red Devils in 1999-00.

15 - Kevin De Bruyne, a strong contender for Player of the Year honours, has been an unstoppable creative force in his third season with the club, contributing a league-best 15 assists in his 33 appearances.

18 - Their run of 18 consecutive wins - from beating Bournemouth 2-1 on August 26 to a 1-0 victory at Newcastle United on December 27 - set a new Premier League record.