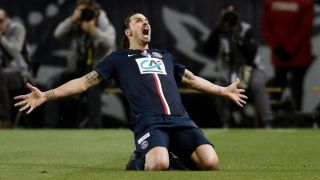 Ibrahimovic steered PSG into the final against Auxerre next month with a superb treble that took him past the 100-goal mark for the Ligue 1 leaders.

The Sweden striker opened the scoring with the landmark goal from the penalty spot in the 21st minute, only for Romain Hamouma to equalise four minutes later.

Ezequiel Lavezzi restored PSG's lead on the hour-mark and a late Ibrahimovic double made sure of their place in the Coupe de France showpiece on May 30 and took his tally for the club to 102.

"The goal is really important for a striker and that's how he [Ibrahimovic] will regain confidence," Marquinhos told France 2.

"Ibra is a super player, important for the team and when he is on the field, he is always trying to help his team-mates and seeks the victory. He is a champion."

PSG have already won the Trophee des Champions and are set to face Bastia in the Coupe de la Ligue final on Saturday and Barcelona in the quarter-finals of the UEFA Champions League four days later.

Asked about the prospect of winning another four trophies, Marquinhos added: "That's the mentality. To win everything.

"The ambition of the club is to win titles and that is the same as the players.

"All the players on the pitch want to win and have demonstrated this tonight and we will continue on that road."