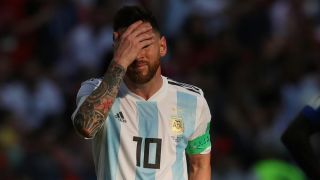 Lionel Messi will play for Argentina again in 2019, according to the national team's general manager Jorge Burruchaga.

Messi has not represented his country since the World Cup, where Argentina were beaten in the last 16 by eventual winners France.

Coach Jorge Sampaoli departed after a chaotic campaign, with Messi's stunning goal against Nigeria helping drag them through the group stage.

The Barcelona superstar's phenomenal hat-trick in a decisive qualifying win over Ecuador secured Argentina's place at Russia 2018 but the captain, who has lost four finals with his country, has yet to comment on when he might return to the fold.

Burruchaga is confident, though, that Messi will be back in the Argentina team in time for their Copa America campaign in Brazil in 2019.

"No date is scheduled right now for the return of Messi and he will not be back before the end of the year," Burruchaga told Goal.

"But it's impossible that he will not be in the national team again. This is transitory.

"I'm sure that next year, he will be in the Argentina national team again."

"I think so," the World Cup winner told Marca when asked if Messi would play for his country again.

"We will see, because if not then we are in trouble."

Interim coach Lionel Scaloni leads Argentina into a pair of friendlies against Mexico this month.