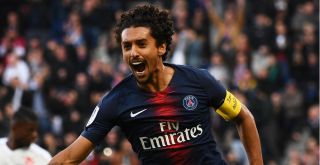 Paris Saint-Germain's winning streak at the start of the Ligue 1 season was extended to 10 games in the rested Neymar's absence as the reigning champions scored three late goals in a 5-0 win over Amiens.

Neymar was given the afternoon off after representing Brazil in Saudi Arabia four days earlier, but Marquinhos, one of his team-mates in that game, headed in his first league goal since May 2017 to send PSG on their way.

The opener came from Angel Di Maria's corner and the Argentinian sent in another near-post delivery from a set piece that Adrien Rabiot nodded in to make it 2-0 before half-time.

Ferney Otero headed into the side-netting for Amiens late on but that only seemed to stir PSG into life as Julian Draxler, Kylian Mbappe and teenage substitute Moussa Diaby all scored in the final 10 minutes.

The result ensured Thomas Tuchel's men maintained their perfect start and coasted to a 10th straight win in 2018-19. They have scored at least three goals in each of those victories.