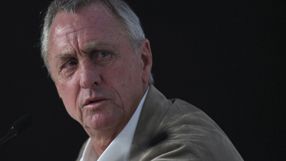 The former Netherlands international, one of Ajax's greatest players, was the last board member to resign.

The other four, including chairman Steven ten Have and former player Edgar Davids, stepped down earlier.

The five resignations follow an Amsterdam court decision in February to ban the naming of Louis van Gaal as chief executive.

Van Gaal, sacked as coach of Bayern Munich last season, was nominated in November by four of the five board members but Cruyff protested they had gone behind his back in appointing his long-time rival.

The court ruled in Cruyff's favour, saying Van Gaal's appointment had not been on the agenda for a board meeting which Cruyff missed.

Cruyff is now due to take an advisory role in the new structure of the club.