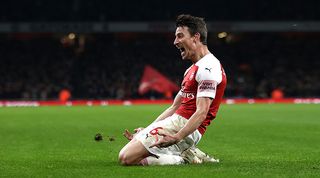 1. Snubbed Cruyff heads for the exit

With speculation already mounting that talismanic skipper Johan Cruyff was poised to join influential former coach Rinus Michels at Barcelona, new Ajax coach George Knobel decided to maintain the spirit of democracy at his club by allowing the players to select their captain for the 1973/74 campaign. It was a decision he came to regret. Those present are unsure of the precise vote distribution, but a stunned Cruyff lost out to Piet Keizer. The result wasn’t even close.

According to team-mate Jan Mulder, Cruyff immediately stormed to the nearest phone and instructed his father-in-law (and adviser) Cor Coster: “You have to call Barcelona immediately, I’m leaving here.” After a fortnight of haggling over the fee, Cruyff hotfooted it to the Camp Nou, leaving Knobel’s pre-season plans in tatters. A disintegrating Ajax lost out on the 1974 Eredivisie title to Feyenoord.

The first ominous signs that combative skipper Roy Keane’s Manchester United career was reaching the end came during a close-season training camp in Portugal in 2005. The United players had been informed that families were welcome to stay at the Vale do Lobo complex in the Algarve, but Keane’s brood of five struggled to pack into the villa, so the Irishman moved them to larger accommodation nearby.

The decision didn’t go down well with coach Carlos Queiroz, or manager Alex Ferguson, who according to Keane started “ranting and raving in the dressing room after the first training session”. Keane also complained about the monotony of training to Queiroz, asking him: “Do you shag your wife in the same position every night?”

After Fergie chose Gary Neville and Ryan Giggs to have dinner with the resort’s owner, as opposed to Keane, and Queiroz threw a training bib at the Irishman and forced him to play up front, the skipper admitted: “It was the beginning of the end for me at United. They were already starting to plan life without me.”

Already set to miss the beginning of the 1996/97 campaign due to a long-term knee injury which nearly ruled him out of Euro ’96, Arsenal skipper Tony Adams went on his last drinking spree following England’s semi-final defeat by Germany. “For weeks, I drank myself into oblivion," he said.

Two days before the season was about to begin, Adams announced to a stunned press corps at the Gunners’ London Colney training ground that he was an alcoholic. With no successor to sacked boss Bruce Rioch formally announced, and only reserve goalkeeper John Lukic signed on a free transfer, the media made much of Arsenal’s shambolic close-season. Yet by the time Adams returned to the fray in late September, he was now sober, and Arsene Wenger had been announced as new manager.

“After the boozy chaos of July and August, getting back to playing football was a godsend,” Adams admitted.

BETWEEN THE LINES Tony Adams' demons: "The sweats, hallucinations, terrors... the voices... this is not normal"

Aware that his Elland Road charges weren’t exactly warming to his unorthodox management approach, new Leeds boss Brian Clough had attempted to seek an ally in firebrand skipper Billy Bremner. Yet following his dismissal in the 1974 Charity Shield after tangling with Liverpool’s Kevin Keegan, the hard-nosed Scot’s subsequent 11-match suspension not only cost Clough a key player, but Bremner’s £500 FA fine saw the pair clash.

“Don (Revie) used to pay our fines,” insisted Bremner after Clough informed him that the Leeds captain would have to pay out of his own pocket. “Don’s not here now,” countered the equally stroppy Clough.

Despite Old Big 'Ead's subsequent attempts to offer the now-suspended Bremner an olive branch by handing him the assistant manager’s job with the reserves, Clough found the Scot “a tough little cockerel”. By the time Bremner returned to first-team action in November, Clough – axed after just 44 tortuous days – was long gone.

5. McFarland misses out on glory

“I’m absolutely convinced that the Derby boys, with Roy McFarland as their leader, can be champions during the 1974/75 campaign,” insisted Rams boss Dave Mackay at the tail end of the previous campaign. Mackay was spot on his prediction, and the Rams won Division One. But they had to do it without their influential skipper, who tore his Achilles tendon in a home international clash with Northern Ireland in May 1974.

“Roy’s devastating injury has thrown our plans into chaos,” admitted Mackay. But erstwhile reserve defender Peter Daniel slotted in superbly for the season, and winning himself a championship medal in the process. After almost a year out, McFarland admitted: “I was never the same player again,” although he returned to play a cameo role at the tail end of 1974/75, with the unlucky Daniel once more losing his place.

11 football shirts that were actually improved by a sponsor

Ranked! The 10 most intriguing Championship signings of the summer

Cabinet undersecretary Rocco Crimi insisted: “Both sides need to calm down, lower their voices and work toward a deal,” after all 20 Serie A captains signed a document agreeing to strike before the 2011/2012 campaign.

“We won’t be backing down on the issue any time soon," vowed Milan skipper Massimo Ambrosini. But despite the chaos and uncertainty, only the opening round of Serie A games were postponed, and a raft of disgruntled stars reluctantly agreed to pay the tax.