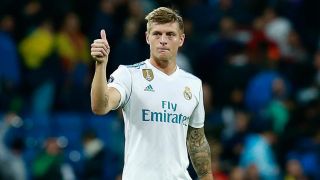 Real Madrid midfielder Toni Kroos would be the perfect signing for Paris Saint-Germain, according to Thiago Motta.

Kroos, 28, is considered one of the world's best midfielders, having starred in four seasons at Madrid – including winning three Champions League titles.

Motta – who will take charge of PSG's Under-19s after retiring – believes the Germany international would be the ideal man to replace him at the Parc des Princes.

"Personally, I would like to see Toni Kroos at PSG," he told Le Parisien.

"He can also play in a more advanced position, but in the style that suits PSG, he is exceptional.

"He is a player I admire a lot and for a long time. He can play the three positions in midfield and in particular in front of the defence."