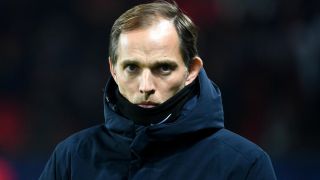 Paris Saint-Germain head coach Thomas Tuchel has urged the Ligue 1 champions to hurry up and sign new players before the transfer window closes.

Tuchel has grown impatient amid PSG's quest to sign a midfielder, with the long-mooted signing of Zenit star Leandro Paredes yet to be completed.

PSG have also been linked with Napoli midfielder Allan, though Carlo Ancelotti and the Serie A outfit are not prepared to sell.

Tuchel vented his frustration following Sunday's 4-1 win over Rennes, highlighting the need for reinforcements after injuries to Neymar and Marco Verratti.

"We're waiting for him [Paredes]," Tuchel said. "I am told it is settled but here is not there. I'm worried. We need players!

"Maybe even an offensive player since Neymar is injured. We are waiting for Leandro but he is not here."

Tuchel added: "It was already like this last summer but it is more serious with the wounds of Verratti and Neymar.

"We cannot do a miracle. There are missing players in the middle. It's January 27! It's almost finished."

"What can I say? We have goals in this club," he continued. "To reach it, to have ambition in the club and for my players, we must recruit players."

No red card? You be the judge... #PSGSRFCpic.twitter.com/b2bY5ouHOP— Paris Saint-Germain (@PSG_English) January 27, 2019

Tuchel was not in a good mood, despite PSG's victory as the German slammed VAR following a wild tackle on defender Thilo Kehrer.

Rennes forward M'Baye Niang escaped a red card after a lunging challenge that caught Kehrer's ankle in the first half – a yellow card awarded even after a video review.

Tuchel was irate with VAR as the half-time whistle blew, with cameras catching him saying: "Go home, go home, take that [expletive]."

"If it's a penalty, if it's not a penalty. If it's a red card, not a red card. There's no point looking at VAR anymore, it's ridiculous."