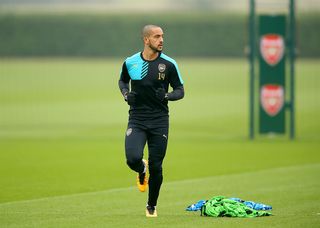 Come on Theo, tell us the secret to running fast?

The most importing thing is to start low. When I push off I’m very low and my head is down. A lot of my power is generated by my legs. Then, I pump my arms. The quicker you pump them, the faster you run. After 10-15 yards I come up so I’m a bit straighter, like a like sprinter. I used to do a bit of athletics when I was younger, but my running technique was a bit different to the other sprinters because my arms were out quite a lot. These days I tend to glide on the pitch – football suits me more than 100 metre sprinting. To help me improve my speed I do a lot of work with agility ladders – this involves quick feet in-and-out to get the fast twitch muscles moving. Once you get through the ladder sprint 10 metres.

In terms of running technique, what are the key things to remember?

If you’re sprinting 10 metres short strides will always get you there quicker and get on your toes. When you do open your legs out, like Gareth Bale does so often, pump the arms, look straight ahead and not all over the shop.

You’re fast. Really fast. But, so are most of the defenders in the Premier League. How do you ensure you win a foot race against a fellow speedster?

By getting right on his toes – to the point where I’m in front of him. This is a dangerous position for a defender because if he clips me he’s going to concede a free-kick or a penalty. If you get in front of a defender it unbalances them because they have to stop their strides and that’s when you can go. It helps if you have a strong upper body, but if he’s also strong it’s going to cause you problems. A lot of players try to get to the ball first and run into the corner and win a free-kick, but If you just let them have it they usually kick it out for a throw-in or a corner. For me, you’ve won the battle if that happens because you’re right up in their half and you can squeeze up. You don’t always have to be first to the ball, especially if it’s in the corner.

It’s often said the first five yards are the most important. How do you build explosive acceleration?

By building strong hamstrings, but you don’t want to put too much bulk on them – that will slow you down. The first 5-10 yards are very important, especially in the Premier League. If you accelerate in front of your defender he has to bring you down to stop you. Then, once you’re in front of him, use your upper body strength to hold him off.

Can you recommend any drills for improving acceleration?

Mark out a Y shape with four cones – make sure the top two cones at the top of the Y are different colours – for example blue and red. Set out the cones 10 yards apart. Jog from the bottom of the Y to the middle cone. As you reach the middle cone have a partner shout out a colour. If they say red, you run to blue and vice versa. This will improve your acceleration, reaction speed and force you to think. Covering a short distance focuses on acceleration rather than top speed, which is what you want. You don’t want to sprint and sprint. Go slow and then sprint.

How do you run at top speed and keep the ball under control?

It’s difficult to explain as I don’t really think about it, it just tends to just stick to my feet. Maybe that’s it – try not to think about it, go with the flow and relax. Years gone by my final ball hasn’t been the best, but it’s something I have improved. It’s been so much better because I’ve slowed myself down. I haven’t been all guns blazing trying to do everything at 100 miles an hour. It also helps if you know what you’re going to do with the ball before you get it. You won’t have to look up and think about what you’re going to do with you’re already a step ahead. Of course, if goes without saying that you need to practice drills in training. Have a friend ping you the ball, then dribble in and out of some cones at top speed, before putting a cross in. Try a few tricks - it’s good to have them in your locker to unbalance the defender. You can even do it against a friend. They don’t have to tackle you, just push you left or right before you put your cross in.

For more football tips see:
Beat your man to the ball
Soup up your sprint speed
Be quicker off the mark
Change direction in a flash
Get rapid-fire footwork
Be first to the through ball