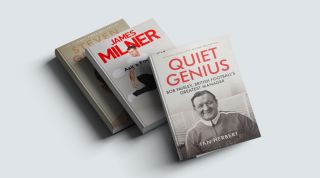 Liverpool aren't just one of the most successful clubs of all time, they're situated in one of the most historic cultural cities in Britain. So no wonder they're fervent ground for gripping retellings of the past.

Boy, do the Reds have some stories to tell – from decades-long domination of English football to conquering Europe six times. With Bill Shankly, Bob Paisley and Jurgen Klopp inhabitants of the Anfield dugout, they've often had a habit for celebrated thinkers, too.

Here's our guide to some of the best Liverpool-related books out there.

Jurgen Klopp has delivered Liverpool's sixth Champions League title and 19th league title. He is, it's fair to say, pretty popular on Merseyside.

Unusually, though. He's also pretty popular everywhere else, too. Not content with being successful and intelligent, he also comes across as one of the nicest men in football.

Raphael Honigstein is one of the UK's foremost experts on German football, and his biography of the ex-Borussia Dortmund manager is the definitive read on Klopp.

Ask A Footballer by James Milner

Those who call James Milner "boring" - looking at you, parody Twitter account - have perhaps never read Ask A Footballer.

Milner comes across extremely well in this book. It's hard to believe that he's in his thirties now and for a player who's won everything in the club game, he lends his experience well for some cool anecdotes on what it's like to be that down to Earth when reaching the very top of football.

Allez Allez Allez: The Inside Story of the Resurgence of Liverpool FC, Champions of Europe 2019 by Simon Hughes

Liverpool's sixth Champions League trophy is extremely fresh in the memory. But if you'd like to relive it again, Allez Allez Allez is certainly a good place to start.

This book looks at the transformation of Jurgen Klopp's side from what he called "doubters to believers", culminating of course in Liverpool lifting another European title, this time in Madrid in 2019. This book is well-written and a must for any fan.

My Story by Steven Gerrard

Stevie G may have lost a few friends with an autobiography that didn't fail to pull punches on former colleagues. Liverpool fans are certain to want to get to know the man behind the armband a little more though.

Gerrard's early life in My Story is particularly interesting, especially his rise to the first team. Unsurprisingly, this is an impassioned and brutally frank read - not unlike the No.8's style in midfield.

By all accounts, Bob Paisley was a genius and a gentleman in his professional and personal lives, respectively. Quiet Genius is the story of that man, written with real admiration of the Liverpool legend.

This is a really interesting look at such a huge icon of the game, not just for Merseysiders but British football in general - and it's an intimate portrait of Paisley too, not just a gloss over him.

Shankly: My Story by Bill Shankly

Bill Shankly is one of the biggest names in the history of the sport. His autobiography is not just a read for diehard Reds but football fans of any club.

My Story is packed with lots of interesting nuggets from the Scot's 15 years at Anfield. It charts his incredible success but still feels like it's coming from the point of view of a humble gentleman at its heart.

A Season on the Brink: Rafael Benitez, Liverpool and the Path to European Glory by Guillem Balague

Rafael Benitez took over Liverpool in 2004, and turned them into European Champions within a year. And if the Miracle of Istanbul wasn't impressive enough, the gulf in class between AC Milan's starting XI and the Reds' that night make it even more incredible.

Benitez didn't just immortalise that Liverpool team; he was on the forefront of a tactical revolution that took over the Premier League.

Guillem Balague is well-known to Spanish football obsessives in the UK, and his account of the 2004/05 season is a must read for Liverpool fans.

Buy A Season on the Brink here

Hillsborough – The Truth by Phil Scraton

No history of Liverpool – the club or the city – can ignore the tragedy of Hillsborough. The deaths of 96 football fans at the 1989 FA Cup semi-final completely reshaped the English game.

The struggle from bereaved families to discover the truth of what really happened in Sheffield that day carried on for decades, and this 2012 book both documents that struggle, covers the day in detail, and traces the political ramifications that led to the British prime minister issuing an apology.

Red or Dead by David Peace

This 2013 novel by David Peace, who also wrote The Damned Utd, about Brian Clough's ill-fated stint as Leeds United boss, is a very different kind of football book.

Covering Bill Shankly's 15 years as manager of Liverpool – during which time the Reds won three league titles, two FA Cups, and one UEFA Cup – Peace's 700-page magnum opus is written in a staccato, repetitive style, described by the Guardian as "hardcore modernist fiction".

While the prose can start off a chore, it soon becomes hypnotic, and while reading it may not be a breeze, it's far less difficult than you might imagine. It's one of literature's great football books.

What Would Jurgen Klopp Do? Life Lessons From a Champion by Tom Victor

Do you want Jurgen Klopp to be your life coach? If you're answer is "yes", this is the book for you.

The Liverpool coach is known for his ability to engage on topics outside of football, and has been praised for his emotional intelligence, both with players and fans.

Tom Victor takes Klopp quotes and extrapolates them out into a way of living that both works better than it should, and provides plenty of laughs.

Buy What Would Jurgen Klopp Do? here

RANKED The 10 best football books ever