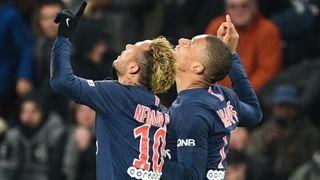 Carlo Ancelotti believes his Napoli side will be coming up against the heirs to Cristiano Ronaldo and Lionel Messi when hosting Paris Saint-Germain on Tuesday.

Napoli head into the Champions League clash ahead of PSG by a single point after three matches in Group C.

But Ancelotti – who coached PSG for two years until 2013 – is wary of the talent at Thomas Tuchel's disposal, particularly Kylian Mbappe and Neymar.

World Cup winner Mbappe is among the favourites for this year's Ballon d'Or, as the coveted award appears set to be won by someone other than Ronaldo or Messi for the first time since Kaka in 2007.

But even if he is beaten to the individual gong, Ancelotti is convinced Mbappe is sure to win it eventually.

"He is a credible candidate to take the place of these champions [Ronaldo and Messi] who win all the trophies," Ancelotti told Telefoot.

"I think that Mbappe and Neymar can be the successors of Ronaldo and Messi.

"If he [Mbappe] does not win the Ballon d'Or this year, he will win it in the coming years without any problem. All teams dream of having him."