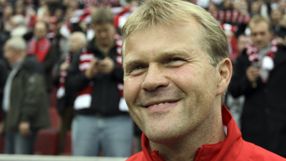 "Staying up is our top priority," said board chairman Werner Wolf in a statement. "All decisions have to be taken with this in mind.

"Following our defeat against Mainz it is a regretful yet necessary measure," he added referring to Cologne's 4-0 hammering on Tuesday.

Solbakken confirmed his sacking in a two-word text message to the Norwegian radio station NRK which read, "Fired!!! Damn!".

Third from bottom Cologne have recorded one win in 10 games and are in the relegation play-off spot, two points ahead of second from bottom Hertha Berlin.

Solbakken's team possess the worst defensive record in the Bundesliga, having conceded 63 goals in 30 matches this season.

Youth team coach Schaefer stepped down as first-team supremo a year ago.