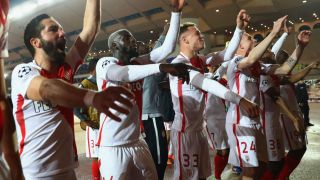 After finishing third in each of Jardim's first two seasons in charge - with sizeable gaps to champions Paris Saint-Germain on both occasions - Monaco took their place at the top in scintillating style in 2016-17.

But how have the club gone from also-rans to Ligue 1 winners in the space of one season - one that has combined a run to the last four of the Champions League?

Here, we take a look at five key factors behind the principality club's remarkable ascent to French football's summit.

Over the past four seasons, Monaco and the rest of France have watched PSG parade the Ligue 1 trophy around following a year spent sweeping aside all comers. But Unai Emery, who arrived from Sevilla to replace Laurent Blanc, failed to galvanise his talented squad sufficiently as they fell short of a fifth successive crown. The departure of Zlatan Ibrahimovic - scorer of 113 league goals during his four years at the Parc des Princes - was certainly a factor, and one which Monaco capitalised on ruthlessly. Jardim's side took four points from two matches against their rivals, whose five defeats this season are as many as in the previous two league campaigns combined.

The performances of Radamel Falcao have been a joy to watch for all football fans - although those who follow Manchester United and Chelsea may be left scratching their heads. The Colombia international, struck down by a serious knee injury in January 2014, struggled badly during loan spells at Old Trafford and Stamford Bridge, scoring a combined five goals in 36 Premier League appearances - although the majority of those came from the bench. His Monaco comeback this season heralded a remarkable return to form, however, Falcao netting 21 in 29 league outings to remind everyone of the devastating ability previously showcased at Porto and Atletico Madrid.

NO HINT OF A EUROPEAN HANGOVER

On its own, Monaco's rise to the top of Ligue 1 is extraordinary. Combined with a thrilling run to the semi-finals of the Champions League, it is nothing short of astonishing. Few can argue that Chelsea have been aided in their dominant Premier League campaign by their absence from Europe's premier club competition, but Monaco have seemingly suffered no ill-effects. In games immediately following Champions League action in the competition proper, Jardim's side have a perfect 12 from 12 record, including scorelines reading 7-0, 6-2 and 6-0. Their home form must not be discounted either, with Monaco dropping just five points at the Stade Louis II, despite a sparse crowd for most matches.

KAMIL GETS THE DEFENCE TO GLIK

Much has been made of Monaco's array of attacking talent, and rightly so, with 104 league goals scored so far this season. But the improvements in defence have arguably been the difference for Jardim's side. In 2015-16, Monaco conceded 50 Ligue 1 goals - only the 11th best record in the division, despite finishing third. However, with one match remaining of the current campaign Monaco have conceded just 29 times - second only to PSG. One main reason for this upturn in defensive frugality has been the arrival of Kamil Glik from Torino. The Poland international has been the much-needed steadying influence at the back for Monaco, who have found the perfect balance at either end of the pitch.

THE KIDS ARE ALRIGHT

Kylian Mbappe has been the poster boy of Monaco's thrilling season, but he is just one of a plethora of young stars embodying the scintillating style under Jardim. The 18-year-old Mbappe has 26 goals in 43 matches across all competitions, but the likes of Thomas Lemar and Bernardo Silva have been similarly crucial to the team's devastating attacking play. Further back, Fabinho, Benjamin Mendy and Tiemoue Bakayoko - all under the age of 23 - have been key cogs in an all-action side. If Monaco can keep the core of young talent together, they could be set to dominate Ligue 1 for a long time to come.