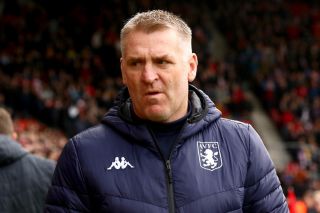 Dean Smith will lead out his beloved Aston Villa in Sunday’s Carabao Cup final with thoughts of his father uppermost in his mind.

Smith’s dad Ron, who was a matchday steward at Villa Park for over two decades, has long been suffering with dementia.

Smith is not sure his father knows he is a Premier League manager, even after going to see him in his nursing home prior to last season’s Championship play-off final win over Derby when he vowed to take Villa back into the top flight after a three-year exile.

Nine months on, Smith has the chance to end Villa’s 24-year wait for a major domestic trophy when his side face reigning champions Manchester City at Wembley.

Asked whether he planned to take the trophy to show Ron should Villa pull off a shock success, Smith revealed: “I could but I don’t think I would get much out of him to be honest.

“I am not sure I have seen his eyes open for the last month or two. It is what it is. Dementia is a tough illness and he is suffering.”

Suggested to Smith that victory would be for his dad, he added: “I will do it for myself first and foremost, but you do it for all your families, that is what this is about. That is what I always speak to the players about.

This is what Dean Smith had to say in his pre-match press conference ahead of the #CarabaoCup Final. 🎙️#AVFCpic.twitter.com/G3jCVKv06N— Aston Villa (@AVFCOfficial) February 28, 2020

“First and foremost you have to play for yourselves. You are the one who goes to bed and you have to put your head on the pillow and will be thinking about your performance, asking yourself whether you did well enough.

“The other side of it is playing for your family because they are the important people in your lives, and they’re the ones you want to send home proud.”

After ripping into his players following last Saturday’s wretched 2-0 performance at Southampton, Smith will be reminding them of Villa’s proud history as five-time winners, and of their journey to date in reaching the final in which they have scored 19 goals.

“The players will be relaxed and focused,” said Smith, who travelled down with his squad following a training session on Saturday morning.

“I’d be told off by Chris Nicholl if I didn’t show his 40-yard goal from 1977 against Everton (in the second replay that Villa won 3-2 to win the League Cup for a third time).

“Plus, I’ll show them how we got here. We’ve scored 19 goals so far and we’ve approached each round as a game to win, and with this, there is now a trophy to go and win. We’ll be going all-out to win, that’s for sure.

“I’ve said before, the history of this football club, five wins and it could be a sixth. It’s been far too long for Aston Villa not to collect some silverware.”