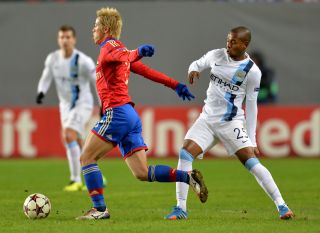 Toure claimed to have been targeted by a section of the CSKA support during Manchester City's 2-1 UEFA Champions League win at Arena Khimki last Wednesday, and met with the head of FIFA's anti-racism task force Jeffrey Webb to discuss the issue on Sunday.

Midfielder Fernandinho admitted his team-mate had been left feeling upset by events in Russia.

"It was a sad episode," he told Perform. "I spoke with him at a training session. He said he was really upset.

"He hopes UEFA can do something about it. This is something we can not accept in football anymore. Not only in football but also in general life.

"I think they must get a harsh punishment. Maybe the Russian FA could do something and ban those supporters from stadiums during a certain period.

"UEFA has to do something as well in order to avoid that in the future."

Fernandinho, who signed for City from Shakhtar Donetsk in the close season, added: "I spent eight years living in Ukraine and I never had this kind of problem.

"I normally say Shakhtar is an exception in Eastern Europe - there is a lot of Brazilians, they treat well and never happened anything like that.

"I think this is related to Russian football. This is something concentrated in Russia ."

The Brazilian admitted it would be interesting to see FIFA's reaction if black players were to boycott the 2018 World Cup in the country.

"I believe, if nothing happens until 2018, this is something to think about," he added. "It would be very interesting to see what would happen if something like that actually materialised - what supporters would think of black players not playing the World Cup."

Fernandinho has made 12 appearances in all competitions for Manuel Pellegrini's men this season.