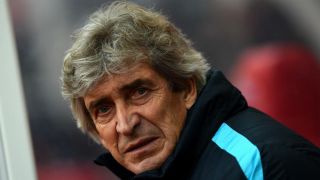 Manuel Pellegrini has urged Manchester City to stick to their attacking philosophy and described the goalless draw against Everton in midweek as an "accident".

City remained three points behind Premier League leaders Arsenal following Wednesday's stalemate but the Chilean insisted their approach was right, even if it did not reap any rewards.

Speaking ahead of Saturday's clash with Crystal Palace at the Etihad Stadium, he told a news conference: "We can't be worried about playing that way.

"It was very strange the team didn't score – it's an accident that happens in football sometimes.

"We must continue to play the same way and trust we will score goals. One of the things this team is not is predictable, we have so many ways of playing."

City have scored 39 goals in 21 Premier League games this season, one more than second-placed Leicester City and two more than table-topping Arsenal.

Pellegrini added: "We continue being the highest scorers in the Premier League for the last three seasons. Not only at home, but also away we try to be an offensive team.

"If we don't score once after having 17 shots, it's just an accident."

City's last clash with Palace, in September,  was settled by a 90th-minute goal from young striker Kelechi Iheanacho and Pellegrini hinted he may turn to the Nigerian again with Wilfried Bony unavailable and Sergio Aguero struggling to hit top form after a series of niggling injuries.

He added: "Kelechi is in the squad list – we will see on Saturday the starting XI.

"He's a young player who is working every day with the team. When they have the option to play games they have to take their chances and every time he's taken his chance.

In addition to Bony, City will also be without Fernandinho, Eliaquim Mangala, Vincent Kompany and Samir Nasri against a Palace side they have already beaten twice this season, including a 5-1 thrashing in the League Cup in October.

"Every game is different, we had a very difficult game against Palace in London, winning in the very last minute," said Pellegrini.

"We were in a very good moment at the start of the season, scoring a lot of goals. It was a close game.

"Maybe here in the cup was a bit easier but we don't think Saturday will be easy at all. They're a strong team with important players."