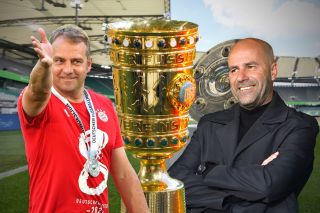 Germany's domestic football season ends on Saturday July 4 as Bayer Leverkusen and Bayern Munich face-off in the final of the German Cup (known as the DFB-Pokal in Deutschland) at Berlin's Olympiastadion.

Bayern, as ever, will be hot favourites to complete a double under coach Hansi Flick, who only took the helm in November last year following a poor start to the campaign under former boss Niko Kovac. Flick's appointment proved a masterstroke, with Bayern claiming their eighth straight domestic title this season.

Bayer Leverkusen missed out on Champions League qualification this year, after finishing fifth in the Bundesliga, but can banish that disappointment with an underdog victory over the 19-time winners of this competition.

There will be plenty of talent on show, with the much-coveted Kai Havertz pulling the strings for Peter Bosz's Leverkusen in what many people will be his final game for the club. Robert Lewandowski may prove the deciding factor, however, with the Pole in sensational scoring form again this season. Lewandowski has struck 49 goals in 42 games this season and will be looking to take his tally behind the 50 mark in the German Cup final.

Kick-off is at 7pm BST and the game is being shown on BT Sport 1 in the UK. See below for watching details where you are.

WATCH PREMIER LEAGUE FOOTBALL Premier League live streams: How to watch every game on this weekend