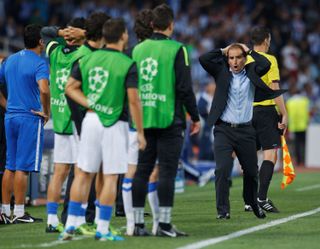 A double from Mexican forward Carlos Vela secured a 2-0 win and a 4-0 aggregate victory for Sociedad over Ligue 1 outfit Lyon, to see them qualify for the group stages of the illustrious continental competition.

It is the first time the San Sebastian based club have made it in to Europe's premier club tournament since the 2003/04 season.

Arrasate - appointed to the Sociedad hot seat in June - said the upbeat feeling among his players at the resounding two-leg victory was uplifting.

"You just have to go into the dressing room to realise how happy we are," Arrasate said.

"It was one of the main objectives in this season and we achieved it.

"We are pleased and we have to enjoy ourselves now, but tomorrow we will start to think about Atletico Madrid because unfortunately time is moving on and we have to carry on."

Arrasate said their French opponents pulled a few shocks with their game style at the Estadio Municipal de Anoeta.

"They surprised us at the beginning of the game because they played directly, they wanted to play in our part of the field and it was tough for us," the 35-year-old said.

"But we managed to withstand the pressure and as time went on we created lots of chances to score. At the end of the day, I think the score is even less than we deserved.

"It is a magic night for us. We were aware we were playing for an important qualification and we couldn't fail.

"The happiness is for everyone, part of this success is for the supporters as well. We are very pleased to have won and to be able to celebrate with them because they deserved it too."

"During the first 30 minutes we believed we could do something," he said.

"We started well and created some chances, I'm thinking particularly about Alex Lacazette's header. At that point we were hoping to get through. After that, during the second half it was more difficult.

"After Real Sociedad scored, everything was more complicated.

"I think their team was well organised, like they were in the first leg, and they were powerful for 90 minutes.

"They were a great team - I don't think we faced the weakest team in the tournament tonight."