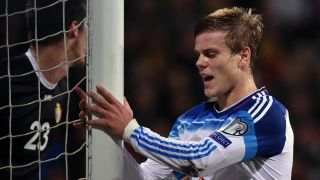 The agent of Aleksandr Kokorin - Cyril Loginov - has made it clear that the Dinamo Moscow attacker could decide against a move to Arsenal due to the Premier League side's lack of silverware in recent years.

Dinamo coach Andrei Kobelev recently revealed that Arsenal attempted to sign Kokorin on loan in the summer transfer window, but his current club only wanted to let go of the 24-year-old on a permanent deal.

The Moscow side's stance saw a switch fall through, but Kokorin's representative has suggested he could still be on the move come January, although Arsenal will not necessarily be his next destination.

"Aleksandr could still move in the January transfer window," Loginov was quoted as saying by News Today.

"That Dinamo turned down Arsenal in the last window does not mean he cannot move in the future.

"We have a great relationship with Dinamo Moscow's management.

"But I don't know whether Arsenal are the right club. I don't remember many outstanding achievements from them, except their recent FA Cup success.

"So I don't know what will happen."

Kokorin becomes a free agent at the end of this season.