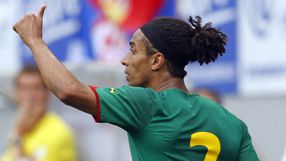 The left-back was named on Monday in a 21-man squad for the friendly in Tanzania on February 6, the country's football federation said.

Assou-Ekotto refused recent call-ups because he was unhappy with the way the Cameroon team was being run but he has been persuaded to come back following a meeting with coach Jean-Paul Akono.

Akono has left out seven regulars for the friendly with Tanzania as he uses the friendly in Dar-es-Salaam to experiment ahead of the World Cup qualifier against Togo in Yaounde on March 24.

Cameroon have three points from two qualifying matches in Group I.