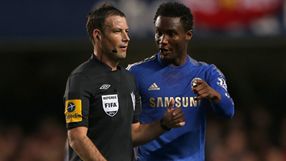 The European champions have though decided there is not "sufficient evidence" to support a second complaint over verbal abuse of another player, who players' union chief Gordon Taylor has named as Spanish midfielder Juan Mata.

Taylor also said on Tuesday that one of the alleged comments was of a racist nature but Chelsea's statement on Wednesday made no reference to the content of the remarks.

Leaders Chelsea reported the two allegations to the match delegate after the 3-2 Premier League loss, which they say was the correct procedure, but only one complaint has now been formally put to the FA.

"Since reporting the matter to the delegate, the club and outside legal counsel have conducted further investigations. Having completed that process we have now followed the correct protocol and lodged a formal complaint with the FA regarding John Obi Mikel," the statement said.

"We will cooperate fully with the FA and the Police as they each investigate the matter. As events on Sunday are now subject to those investigations we are unable to comment further until those processes are complete."

London's Metropolitan Police and the FA previously said this week they were already looking into the allegations, which have cast a new stain on the English game just as Chelsea captain John Terry serves a four-match ban for racist abuse.

Clattenburg, stood down from this weekend's matches, has made no comment but the Professional Game Match Officials Board (PGMO) which manages top English referees has said the issue is "being treated with the utmost seriousness" and Clattenburg "welcomes the opportunity for the facts to be established".

The referee sent off Chelsea's Branislav Ivanovic and Fernando Torres in the Stamford Bridge clash, despite replays suggesting Torres may not have dived and was clipped by defender Jonny Evans.

United's winner also came thanks to an offside goal by Javier Hernandez.