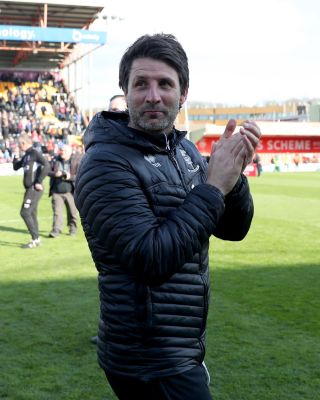 A delighted Danny Cowley saw his Lincoln side earn a second promotion in three years despite being held to a 1-1 draw by Cheltenham at Sincil Bank.

Substitute George Lloyd might have spoiled the Imps’ party by cancelling out Shay McCartan’s opener but Cowley’s men were promoted by virtue of both Mansfield and MK Dons – who face each other on the final day of the season – failing to win too.

The single point proved enough, however, and the boss was left to reflect on another fine season.

“I’m really pleased for everyone connected with the club,” he enthused.

“Obviously it’s not quite how we planned to do it – we were flat today and lost our intensity after we scored.

“We’re 19 games unbeaten though so we have to realise it’s more than just about today. It’s a project that we have been completely focused on all season and the objective was always to win promotion.

“It’s a lifetime’s work for Nicky (brother and assistant) and myself, and I know the commitment both we and the players have had to make to get this far. I’m really proud of everyone for what we have achieved.”

It was quite a subdued atmosphere at the end of the game and in fact some home supporters proceeded to leave the ground unaware that the other results had gone their team’s way.

Even Cowley was left to question whether his team were promoted or not.

“We were trying to work out what was happening even though we were aware of all the permutations going into the match,” added Cowley.

“On a couple of apps the other games were over and on a couple they weren’t, so we were a bit cautious. My best friend Ross is excellent at maths though and he came on the pitch at the end to assure me we had done it!”

After a drab opening the game came to life in the 18th minute when McCartan pounced on a loose ball 30 yards from goal and saw his bouncing effort fly over the despairing dive of Scott Flinders.

After Lloyd had equalised, Chris Hussey spurned a late chance for the visitors, volleying over from Ryan Broom’s cross, while at the other end Danny Rowe saw his effort creep agonisingly wide of the far post, with goalkeeper Flinders beaten.

Cheltenham boss Michael Duff felt his side were worthy of a point.

“Lincoln completely outclassed us at our place earlier in the season without even breaking sweat – it was men against boys that day,” he said.

“Today, however, shows how far we have come and we certainly didn’t deserve to lose.

“I’ve congratulated Danny Cowley on an excellent season and I wish them all the best for League One.”