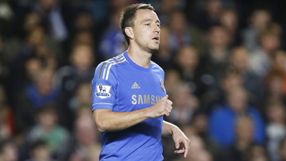 LONDON, Oct 5 (Reuters) - John Terry's defence for his racial slur towards Anton Ferdinand was "improbable, implausible and contrived" the independent Football Association commission that banned him for four matches, said on Friday.

The FA's findings, published in a 63-page document on Friday, said there was no evidence that Terry was a racist.

However, they dismissed his account of the event and cast doubt on the evidence given by his Chelsea team mate Ashley Cole, acting in Terry's defence.

Cole, who has played 98 times for England, then used his verified Twitter account - @TheRealAC3 - to insult the FA, tweeting: "Hahahahaa, well done FA. I lied, did I," before ending his message with an abusive expletive.

The comment was later deleted and Cole apologised unreservedly in a statement through his solicitor, the BBC reported.

Shortly after the FA's document was published, Chelsea manager Roberto Di Matteo, monitored by the club's head of communications Steve Atkins at his pre-match media briefing before Saturday's Premier League game against Norwich City, attempted to steer clear of the issue.

Atkins said Chelsea would not comment on the case while Terry still has the opportunity to appeal the decision to ban him for four games and fine him 220,000 pounds ($355,600).

"John Terry has the right of appeal and in view of this it would be inappropriate for us to comment further," he told reporters at the club's training ground at Cobham, south of London.

Atkins stepped in several times before Di Matteo could answer questions, but the Chelsea manager repeated his assertion that he had no problems with Terry remaining as captain.

"From my judgement of this man, I have known him for many many years since we played together and I have never had any doubt that his comments would be of any kind of discrimination against any other ethnic party."

He added: "At the moment he is our captain and he is available to play and that's the situation."

Terry was found not guilty of a racially aggravated public order offence by London magistrates in a criminal prosecution in July, however, the FA used different standards of proof.

The FA, who held an inquiry into the incident following the court case, ruled they did not believe Terry was a racist, but rejected his defence saying there was no doubt he racially abused Ferdinand in the game, after being provoked by the QPR player.

In the document, the FA said there was "no credible basis" for the Chelsea skipper's defence that he was only repeating words he believed the QPR defender had said to him.