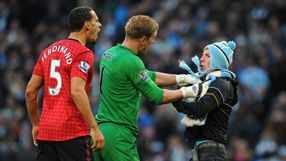 Stott was restrained by City goalkeeper Joe Hart as he attempted to reach Ferdinand, who was celebrating Robin van Persie's late winner for United at City's Etihad Stadium.

Ferdinand was already bleeding from a cut above his eye, caused by a coin thrown from the stands seconds earlier in the heated grudge match on the December 9, which United won 3-2.