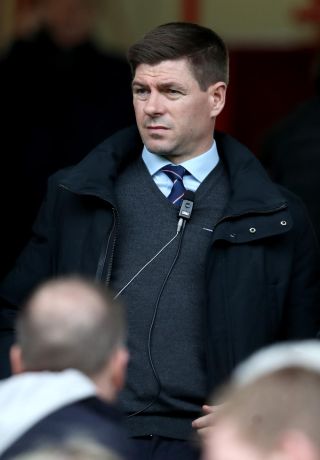 Rangers boss Steven Gerrard says it is about time the penny dropped with supporters after Scottish football suffered its latest missile-throwing shame.

After a campaign that has been dogged by objects raining down from the stands as well as pitch invasions and offensive chants, the Ibrox manager admits he is fed up discussing unsavoury antics on the terraces.

Light Blues captain James Tavernier became the latest player to be targeted by louts when he had to dodge a lighter thrown from the home support during the Light Blues’ clash with Motherwell at Fir Park.

Referee Nick Walsh was forced to stop the action after Tavernier was as he ran over to the far touchline to take a throw-in.

The official took action to douse the first-half flashpoint when he called in police and stewards to surround the section housing the home side’s ultras group.

The incident did not deter Gerrard’s side as they claimed the win thanks to Scott Arfield’s first career hat-trick but the Rangers boss confessed he was frustrated seeing his team’s display once again overshadowed by the behaviour of fans.

“It seems like we’re trying to send messages out every time we speak to the media, which is a shame.

“It’s dangerous for the players when there are objects thrown on to the pitch, whether it be a lighter or whatever it may be. It needs to stop.”

Motherwell started the brighter of the two teams but contributed to their own downfall with three horrendous defensive blunders.

First Tom Aldred tried to cut out Jermain Defoe’s through ball to Arfield on 22 minutes but succeeded only in playing the Canada international into an even better position to score.

His defensive partner Charles Dunne then sold team-mate David Turnbull short with a needless pass six minutes before the break that allowed Rangers to steal possession and again tee up Arfield.

His treble was wrapped up on the hour mark when the Steelmen were again suckered by Rangers’ relentless pressing as Gerrard was left purring.

The Ibrox boss – who watched the game from the stands as punishment for his part in last week’s Old Firm controversy – added: “We were certainly very clinical in front of goal. Scott’s finishes were all excellent in different ways but as a manager I’m more pleased with the all-round performance.

“You’ve got to give Sean Dyche the credit for (seeing Arfield in a more advanced position of late). I played against Scott many times when he played that narrow left-sided role for Burnley.

“He’s very effective at it but he can do it from both sides. He’s a very clever individual out on the pitch, he understands tactics and he understands where to be in and out of possession.

He played the role very well from start to finish and he got his reward by being clinical in front of goal.”

Well boss Stephen Robinson vowed to stick by his new high-risk game plan despite the defeat.

He said: “We cost ourselves the game. I don’t think there was any great Rangers play which won the game, it came from three individual errors.

“We don’t deal with the ball in our own box when we should clear it and that leads to the first goal. We are playing differently, we are playing out from the back, it’s risk versus reward, and our decision-making was poor for the next two goals.

“But we are not going to rip everything up and say that’s not the way we are going to play. It’s about educating people and when to play and not to play.”